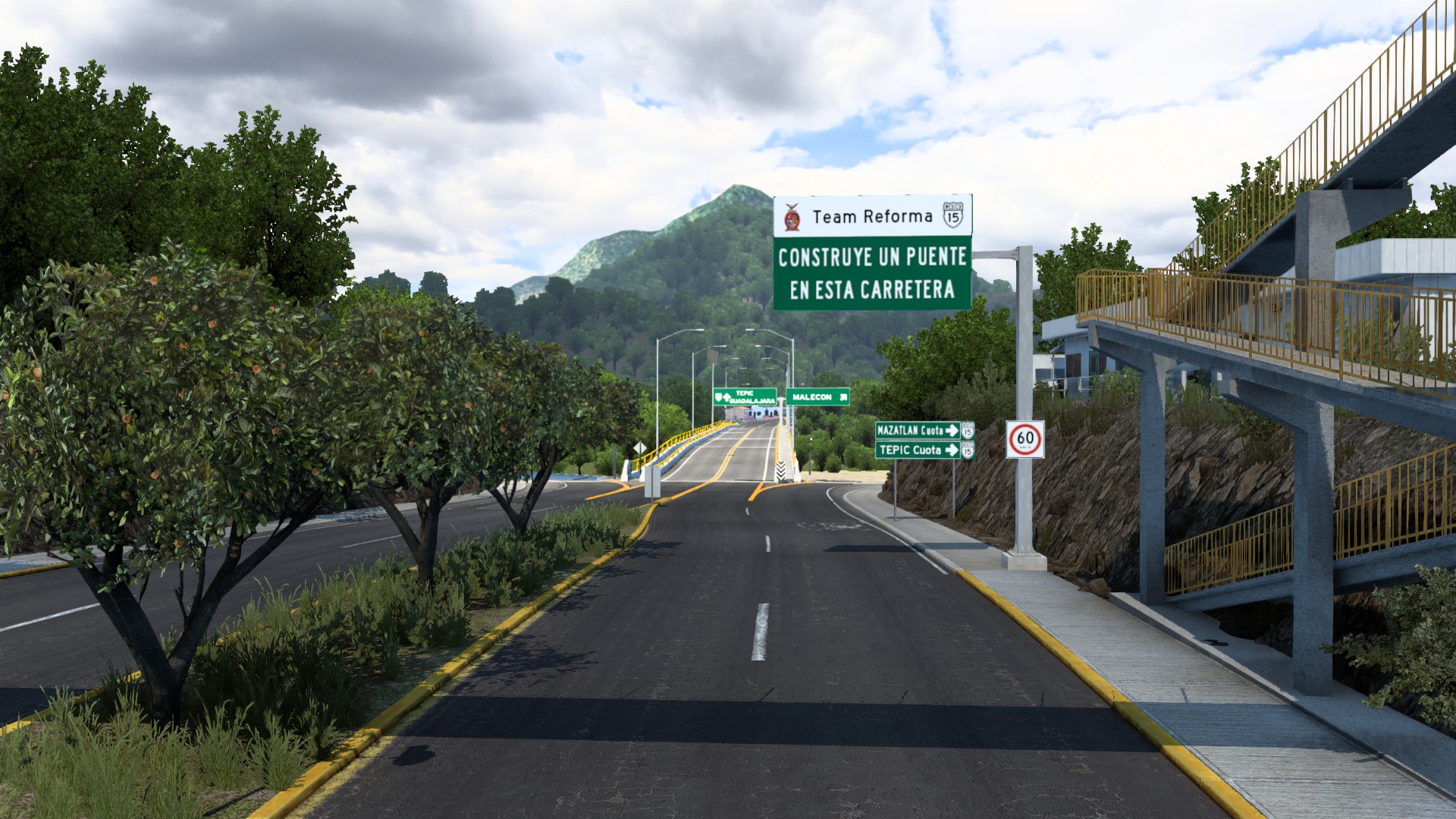 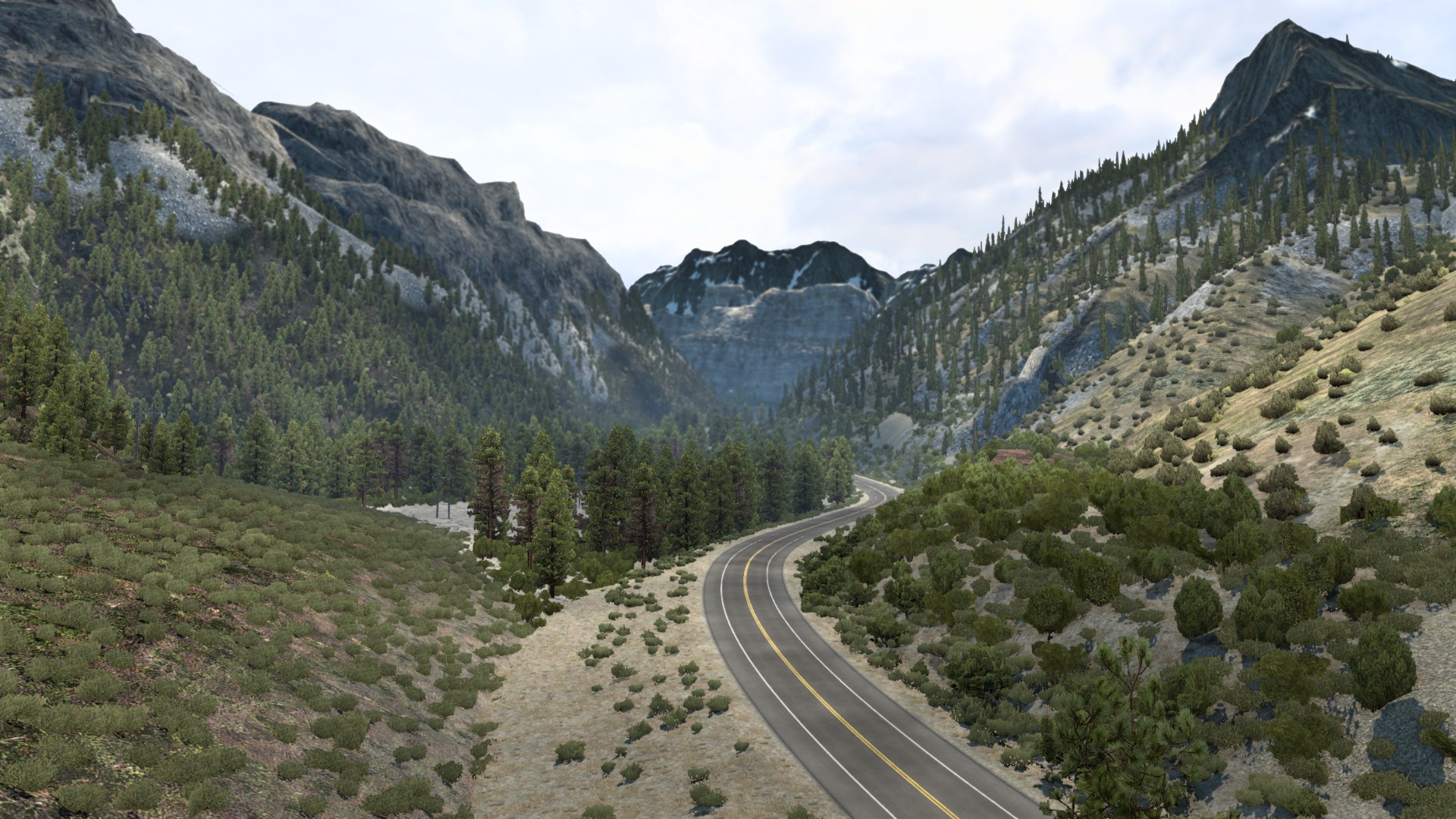 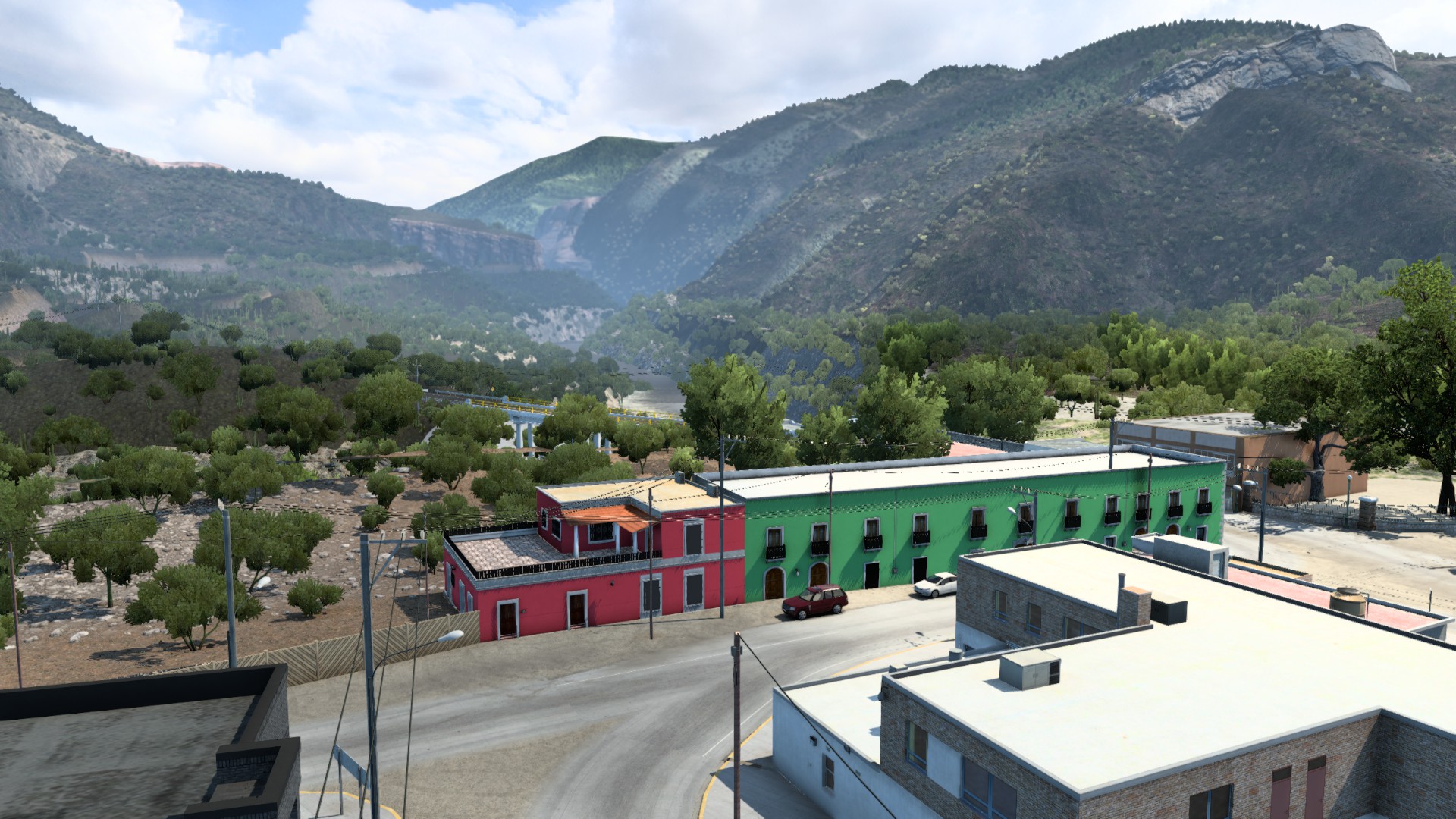 Descriptions:
UPDATE! Reform 2.1.8!
Updated all projects for ATS version 1.41 Which includes general fixes in the project;
– Maps updated to version 1.41 of the ATS, with all improvements to that version applied to the map.
– Free compatibility for ATS version 1.41
– Reconstruction of Nogales (Arizona and Sonora)
– Improved and corrected areas of error where mountains suddenly appear or disappear, check the area of US 395, Interstate 80 and 5 (all areas of Reform), Reno, Sacramento, Carson City, Santa Teresa, Nm, Chihuahua-Juarez (Mexico 45) and other areas. Still need to replace some other regions of that error, if you see mountains suddenly appearing or disappearing, please report it as bug in our server to continue making improvements and fixes to the map.
– Replaced Susanville, California with SCS version, changes adapted where our map is combined with SCS in Northern California area, now available as much as California State Route 36 and 44 to choose, zone called as Lassen National Forest. I’ve decided to keep Interstate 5, originally as it was on the Sierra Nevada map, since the interstate design for vial distributors is better than the SCS version. I’ll wait for SCS to remodel more areas in California before I proceed and make my modifications in that area.
– New phitozoosanitary review posts available in different regions of the map in Mexico and the USA.
– New prefabs and models of Mexican companies added to the map, a parody version of Sorania and Rodents was added in different areas. Thank Stephanie for her work on new prefabs and models to the game.
– Barrels and Puerto San Carlos mod correction
– Correction in Pazz Mod areas
– New custom and editable signs (for developers)
– List of enhanced areas for Reform 2.1.8 (1.41);
* Rebuilt Nogales (Sonora and Arizona)
* Villanueva, Zacatecas rebuilt
* Eyes, Jalisco improved
* Concordia, Sinaloa rebuilt
* Improvements to Durango-Mazatlán collecting booths
* Improvements on free road Mazatlán-San Blás
* Improvements at phytosanitary inspection post at the border with Nayarit and Sinaloa
* Rebuilt Parador in Acaponeta
* Rebuilt Sinaloa acaponet
* The Thousand Reconstructed
* Parador in Mexcatitlan rebuilt (Nayarit)
* The Peñitas rebuilt
* Ruiz, Nayarit rebuilt (stop)
* Rebuilt San Blas collecting booth
* Las Varas, Nayarit rebuilt
* Sayulita, Nayarit rebuilt
* The Peñita of Jaltemba, rebuilt Nayarit
* The Jump, Durango rebuilt
* Santa Clara phitozanitary post, rebuilt Durango.
* Bermejillo, Dgo, rebuilt
* Ceballos rebuilt
* Vicente Guerrero, Durango rebuilt
* La Honda Parador, rebuilt.
* Hatter, Zacatecas improved.
Many of the improvements were made by Milton, support him;
paypal.me/elmilton
– Corrected many areas of the map where errors were reported, thank you very much for the reports!
Download map, files on project site;
https://reformaats.dudaone.com/downloads
You occupy the following files in the correct order in the mods manager;
Reform 2.1.8
If you use other mods like Promods and C2C;
– Reform & ProMods Background Fix
– ProMods Canada (any order)
-Reforma C2C Compatibility Patch v.8
-C2C v 2.11.15
– Reform v2. 1.8
Oregon, WASHINGTON DLC REQUIRED, NEW MEXICO, UTAH, IDAHO AND COLORADO FOR THE RIGHT MAP WORKING. Otherwise the mod won’t be able to work.
Please consider supporting me, this update led to hundreds of hours working and editing all maps to ensure compatibility and proper operation.
paypal.me/eeblem
or get more exclusive roads support me on patreon;
patreon.com/eblem
Thank you and greetings!

This website uses cookies to improve your experience while you navigate through the website. Out of these, the cookies that are categorized as necessary are stored on your browser as they are essential for the working of basic functionalities of the website. We also use third-party cookies that help us analyze and understand how you use this website. These cookies will be stored in your browser only with your consent. You also have the option to opt-out of these cookies. But opting out of some of these cookies may affect your browsing experience.
Necessary Always Enabled
Necessary cookies are absolutely essential for the website to function properly. This category only includes cookies that ensures basic functionalities and security features of the website. These cookies do not store any personal information.
Functional
Functional cookies help to perform certain functionalities like sharing the content of the website on social media platforms, collect feedbacks, and other third-party features.
Performance
Performance cookies are used to understand and analyze the key performance indexes of the website which helps in delivering a better user experience for the visitors.
Analytics
Analytical cookies are used to understand how visitors interact with the website. These cookies help provide information on metrics the number of visitors, bounce rate, traffic source, etc.
Advertisement
Advertisement cookies are used to provide visitors with relevant ads and marketing campaigns. These cookies track visitors across websites and collect information to provide customized ads.
Others
Other uncategorized cookies are those that are being analyzed and have not been classified into a category as yet.
SAVE & ACCEPT