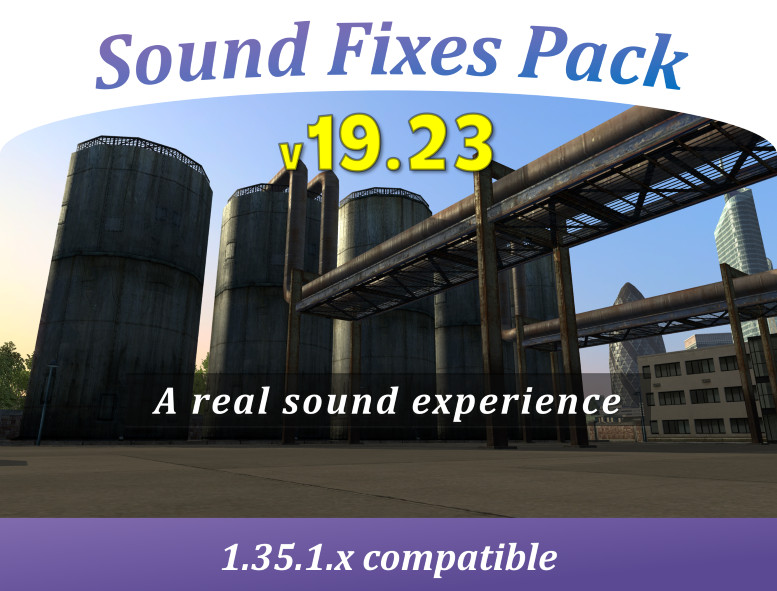 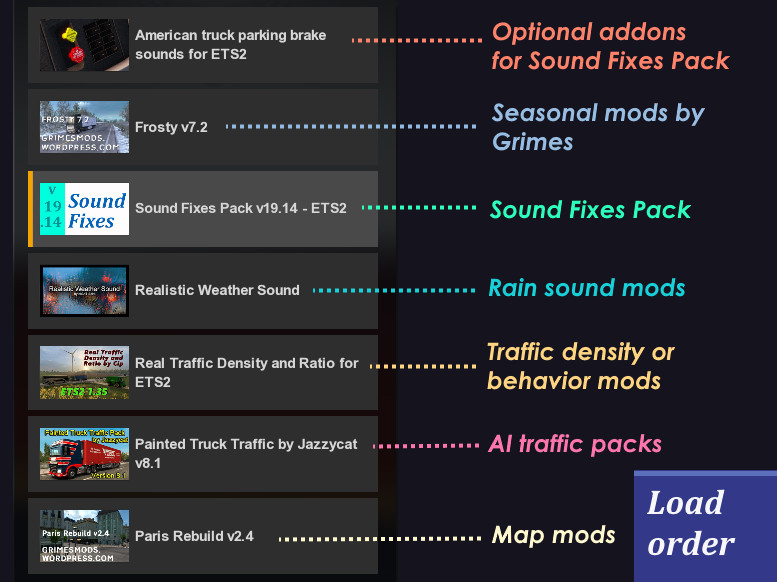 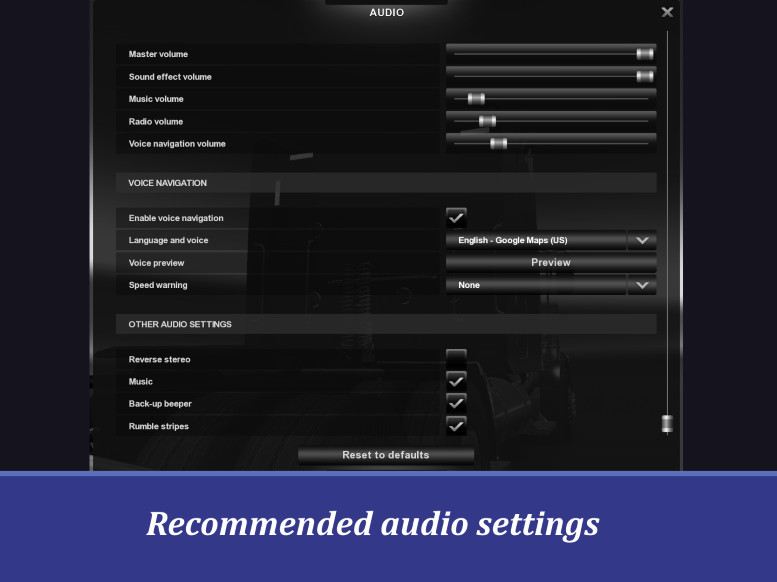 – Pack provides improvements to common sounds in the game. It includes euphonious, relaxing and real sounds.
– The goal of the mod is to make the game’s sounds feel like real life. The mod will have regular updates to cover more sounds to add immersion. Thus the Steam Workshop version is highly recommended for quicker updates.

* ETS2 1.35.1 + ATS 1.35.1. No errors in game log. Must have high priority in Mod Manager.
* Compatible with all maps and all trucks, including truck mods.
* Does not replace individual truck sounds, so this mod can be used with an unlimited amount of truck sound mods of your choice.
* Supports compatibility with your favorite rain sound mods as this does not alter rain/thunder sounds. Check the load order image included for more details.
* If using any of Grimes’ seasonal mods, place the seasonal mod with higher priority than the Sound Fixes Pack for a more accurate seasonal experience.
* If using winter mods, please enable Frosty Winter Weather Sound addon with higher priority (in Options folder or Steam Workshop).
* Traffic density/behavior mods (in lower priority in Mod Manager) can enable the realistic sound ranges plugin from Sound Fixes Pack by inserting this line into def/traffic_data.sii: @include “traffic_data_update.sui”

* Real interior + exterior tire sounds. Tires will resonate in the cab depending on how fast you are accelerating and what speed you are in, giving a feel for your sense of speed.
* Heavier gravel sounds on dirt/gravel roads. Tire sounds for grass also included.

* Light and medium impacts to suspension can trigger cabin squeaking and movement sounds of the cabin.
* Hard impacts can trigger key swinging sounds in the interior view.

* Retro/historic ding sound for while the fuel is pumping (circa 1960s to 1970s). The number of dings can help give you an idea on how much you refueled.
* Real fuel pump, fuel lid, door close, seat belt click and key insertion sound effects for after refueling to a full tank.

* More refined generic AI traffic car sounds. Less buzz noise and more tire sounds and quiet engine sounds.
* AI traffic vehicles given new horn sounds. Depending on the patience of the driver, a short or long honk may be used.
* Carefully detailed real AI engine/horn sounds for individual vehicles from the base game as well as AI traffic mods.
* You can hear the slight sound of vehicles overtaking you or passing by you in the oncoming lane.

* Appropriate volumes for prefab soundscape in American Truck Simulator.
* Suitable volumes for the sounds of the environment in various map mods.
* Reduced volume for gate sounds in the Animated Gates mod by Schumi (both ETS2 and ATS).

## 10. Air horn sounds
* Improved air horn sounds for American Truck Simulator available at the service station (replacing existing ones).
* Air horn sounds available for ATS are: Used air horn (low price), a sweet and deep air horn, and a train horn. WARNING: Not recommended to use more than two air horns at a time. [ATS only]

The mod also provides real top speeds, real torque values and real colors for the AI vehicles which are modded with custom sounds.
This is due to the top speed, engine torque, and color settings being shared in the same file as the sound settings for each AI vehicle.
However in the interest in bringing realism, the AI vehicle colors are 100% verifiable using real paint codes, colors from the paintref website, and photos.
Rarer colors (e.g. purple) will have a lower probability to be seen.

* SCS Software for base sounds
* Drive Safely for sound edits, some sound samples, and for compiling mod
* antonvezdehod, Ludmilla and Katixa/Irreo for some tire sounds
* Balamut for some key swing and light suspension sounds
* AlexeyP for some trailer coupling, gate/barrier and fuel pump sounds, and sounds from Improved Environment Sound
* cipinho for some AI traffic sounds
* kriechbaum for light switch, blinker off, and high beam stick sounds
* Slider_556 for cleaning suspension sound effects

The SCS Forum link below for Sound Fixes Pack holds all official download links and can be used to give feedback and ask any questions about the mod:
http://forum.scssoft.com/viewtopic.php?f=212&t=200919