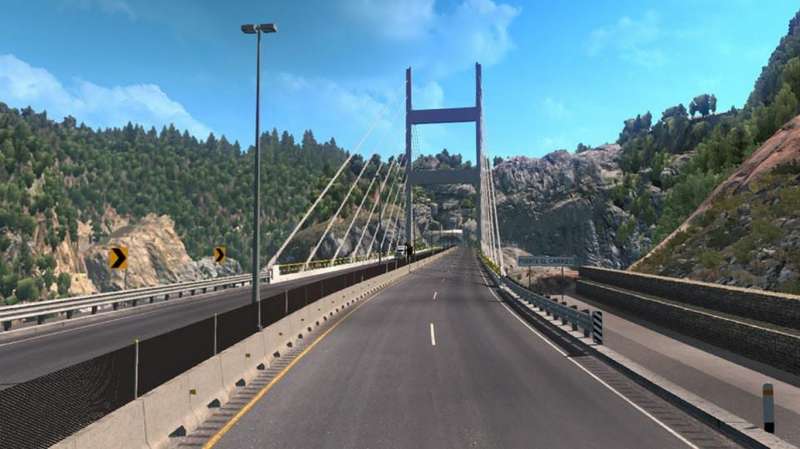 Changes v2.1.12C
Various fixes
Invisible Walls Fixed
Dependence on the PaZzMod map is removed, now the map works both with it and without it

Changes v2.1.12
Update for 1.37
You need Oregon, Washington, New Mexico DLC for the map to work

Changes in 2.1.9 from 06/28/19
-Fixed invisible wall on the bridge near the city of Mazatlan (Villa Unión)
-Fixed invisible wall in Canatlan repair shop
– Soil correction in the construction of a building in Vallarta
-Fixed floating grass in Tepic
-Fixing houseboats in Sombrerete.
-Fix traffic in tollbooth
-Fixed floating objects, such as lamps in the construction zone and in cities.
-Fixed traffic blocking in Durango (Durango)
-Fix traffic loss in Vallarta.

Changes in 2.1.9
-Map updated to version 1.35.x, which includes all updates, such as voice GPS, new visual effects, etc.
– The card works with DX11 (same as DX9)
-Main improvements in the landscaping of the states of Aguascalientes, Zacatecas and Durango, you really need to travel the roads again!
-Included new graphical improvements, such as improved reflection on asphalt, water, various use of textures, new textures from DLC Washington
-New custom models.
-New Mexican bridges, next to the real Mexican bridge, more realism, no crashing over bridges.
Reconstructed Durango-Mazatlan Highway with new bridges and landscape. The same route has been slightly optimized.
– General optimization of the entire project. in the main cities everything should be in order, and many difficult areas in the mountains will still work on a future version to optimize the map without losing quality.
-Fixed a bug where the police escort machine disappeared on a special route from Aguascalientes to Zacatecas
-Fixed a bug due to which you could not unload in the mine of Guanachevi.
-Fixed weather effect under bridges and tunnels, there is no more rain in the tunnels.
-Fixed some texts of road signs.
-New areas for sleeping and refueling.
-Better tracking and some improvements on highway 45, between Fresnillo Durango, see it again.
-Better traffic handling at specific points
-Functional car show Kenworth on the map.
-Correction of flying objects, holes and other small visual effects on the map.
-Roughness on asphalt general correction
-Fix several problems and errors recorded in the last 3 months.
-Main changes in the Mega Resources file for optimization, correction of signals, compatibility with any other mod (for example, C2C)
-Fixed Walbert prefab in Everett, WA
-Fixed some SCS characters (for example, wrong position, color of characters, etc.), There is no longer a replacement for SCS characters in the Mega Resources file.
-Fixed a hole in Yuma, in the Viva Mexico map file.
-Fixed map background in Viva Mexico and Mexico Extremo, so Washington state can be displayed with an inscription.
-Fixed some minor problems on the Mexico Extremo map, such as holes, invisible walls, water level error, -Overlapping trees, etc.
-More optimization in cities, especially in Parral.